The noise at the market was overwhelming, gates banging, stressed out cows mooing at their cubicle neighbours and trying to locate their relatives a few concrete stalls down, masculine farmers chatting away and the auctioneers rapid jabbering of numbers. As soon as we got there I wanted to leave. So did Rob. It was sensory overload, not just the noise but the smells too and the sights, looking for our cows amongst the stalls and spotting people we vaguely knew, trying to remember names.

Our cows are rather “precious”, having been pampered and groomed and out doors all year on lush grass. They aren’t used to concrete under foot or having people up in their faces. And they certainly aren’t used to be whacked and poked with a stick as the man in the ring was doing… He couldn’t hear my protests of “leave her alone” over the deafening auctioneer so I very nearly grabbed his stick to poke him back with it… I didn’t, instead I walked briskly away from the auctioneers stand and cried as he slammed the hammer down with a loud “SOLD” for our last and favourite cow.

Rob hugged me and reminded me to focus on why we were selling them.

I haven’t got a picture to go with this post – I haven’t taken it yet. Instead I am imagining all the pictures I will take when we are travelling: The Rocky Mountains, Monument Valley and Yellowstone in the USA; the forest and lakes of Canada; coral reefs in Australia, ancient cities of Europe; and a diversity of landscape in New Zealand that, as yet, I cannot even quite imagine.

The USA is vast. Just getting across it will take so much of our time. We only get 3 months on a standard visa.

I’ve been listening to an audio book by Bill Bryson in which he describes the Appalachian Mountain range and an email this morning from a fellow blogger who lives in those parts has left me thinking perhaps we should cut out the south and explore the central mountain region between Virginia and Kentucky more. The history of the region is fascinating, shrouded in mystery and intrigue and has played a key role in American history as a barrier to East to West travel. In 1999 a BBC correspondent Richard Lister talks about his journey to Sneedsville and the history of the Melungeon people of the region… I wonder if much has changed in the last 14 years – if the town is any easier to reach and if the knowledge of the first settlers to America is any further forward, perhaps having empowered the people as he suggests? I’m intrigued! The idea of such independent people living self sufficiently in the mountains commands huge respect. Yet their reasons for developing such self reliance is down to persecution and prejudice.

During our journey I am hoping to learn far more about the history of racial clashes from both long ago to present day and it’s something we hope to teach our children about. Knowledge and understanding of conflict from both sides are the tools we need to arm our children with so as to prevent perpetuating the ignorance which is the ultimate cause of most prejudice. But this can’t be done through education alone… diversity must be experienced.

Living in ethnically diverse England, albeit in one of the least ethnically diverse and more racially prejudice regions (possibly the only thing I don’t like about Cornwall), I am somewhat sheltered from the racism in the rest of the world and our children are thoroughly under exposed to alternative live styles and cultures (except perhaps of the hippy variety). Yet to move forward as a united race of people we must teach our children to respect and indeed welcome diversity and allow them to experience as many races and cultures as possible in a positive and enjoyable way.

The geology of the mountain range is fascinating too, having been born 480 million years ago, they were then almost entirely eroded to flat plains before being up lifted again. The second uplift rejuvenated the springs which had caused the erosion and are now, again, following ancient folds and faults or carving out new canyons through layers of hard ancient rock, exposing the layers and features.

In addition to a rich human history and stunning geological features it is also an area rich in diverse wildlife. The southern stretch of the Appalachian Mountains was never touched by glaciers and therefore is home to a range of “slow growing” species such as salamanders and interesting snails. The Ice Age induced extinctions in the north of the mountain range didn’t occur in the south and therefore the rivers in the region are rich with crayfish and mussels. There is also incredible bird life there from bald eagles to the scarlet tanager. And as for mammals… well, as the boys keep reminding me… “mummy, you’re scared of bears!”

So the question is… do we cut out Memphis and the Mississippi in lieu of the mountain trails, wildlife and people of the Appalachian Mountains – Or do we wizz through them to reach to south, to the culture, music and cuisine, to join poor boys and pilgrims with families, down the highway, through the cradle of the civil war, to bounce on in to Graceland? 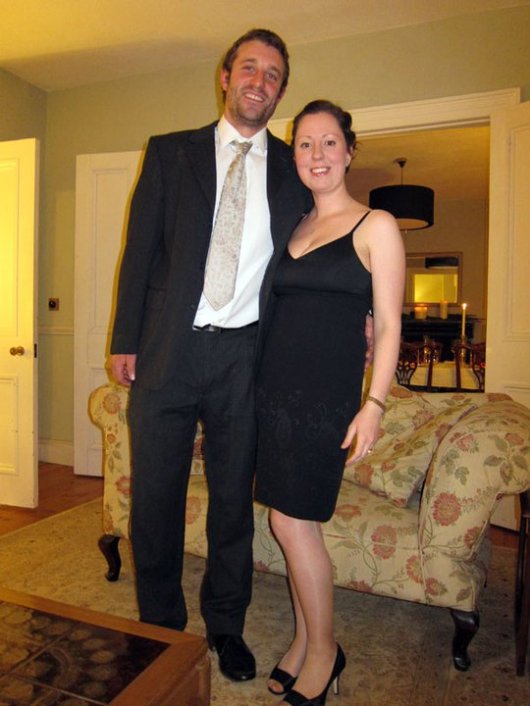 A couple of years ago, nearly three in fact, my big strong husband hurt his back. It was the start of November and a couple of days later a thick frost took hold of everything. At the time we had a number of pigs with piglets and I was feeding my own little piglet, Patrick. He had “growth issues” and so I was breastfeeding on an epic scale, eating well and not drinking booze.

The frost was a welcome change from the mud but it froze the pipes solid. Rob’s injured back meant that I had to carry out 60 litres of warm water from the kitchen every morning and afternoon to the pigs in the field. I lost weight… rapidly! I also got strong! We had a 25l water container and in the first few days I could barely fill it half way but within a week and a half I was happily lugging it full across the kitchen to the sack truck and then over the electric fences to the water troughs.

I turned 30 that January and I wore the same dress I had worn on my 18th… I was chuffed to bits!

Then Rob’s back got better, Patrick grew a bit and started solids, we got wwoofers to help on the farm, the frost melted mid Jan and my delightfully toned body slipped back to the flabby “I’ve had kids” state it had previously been. Getting pregnant again then sealed the deal “I’ve had 3 kids, that’s my excuse and I’m sticking to it”… Until now!

Rob bet a friend that I wouldn’t go to 10 fitness classes with her… and lost! And now he’s in on the act. He’s worried that with such a physical job at the moment keeping him in shape and healthy that when he stops to go travelling he’ll balloon. We are going to have long hours sat driving and lets be honest, the States aren’t known for their salads and healthy options!

So we are getting fit together, a mini team dean adventure! We’ve join the gym in Fowey and are actually really enjoying it. My personal goal is to fit back into the dress in the picture… I’m actually going to print a small copy of that out, laminate it and keep it in front of me on the rowing machine and tread mill – for motivation. Closer to the time we will work out exercise routines that we can maintain whilst we travel. Until then… watch this space, I’m hoping to be back in that dress by Christmas!

It’s 5 months tomorrow until we depart from London Heathrow and the excitement is building. That may sound ages to some people (mainly those without children whose lives always seem to progress at a more leisurely pace) but to us it’s virtually tomorrow! Although I’ve been busy with work over the last month and haven’t been able to achieve much, things are now settling down and I am turning my attention to preparing for the adventure.

So, we are getting rid of “stuff” and minimising our lives. We have a hell of a lot of “stuff” in our house and this is a daunting task to say the least. We’ve so far sorted the attic out and partly boarded it for more “stuff” to go up there. I’ve also tried to limit my keepsake memories to one 35l tub… and failed. I so far still have two tubs and an awful lot more “stuff” to work through. Rob on the other hand didn’t have enough to fill his 35l tub and is keeping random things just so it didn’t look too empty.

Reducing our dependence on “stuff” is all part of the journey we are on though and I am determined to reduce our load. The cupboard pictured above is in our hallway and has looked like that since we moved into our house over 18 months ago (I deliberately blurred it a bit to reduce the horror!). Surely if I haven’t used the things in there in a year and a half then I don’t actually need them? Hmmm…. yes in theory although I don’t doubt that in practice as I open the boxes and find my long lost “stuff” I’ll suddenly need it all and wonder how I have coped without it. I intend to tackle it this weekend and we shall see how it looks next week…