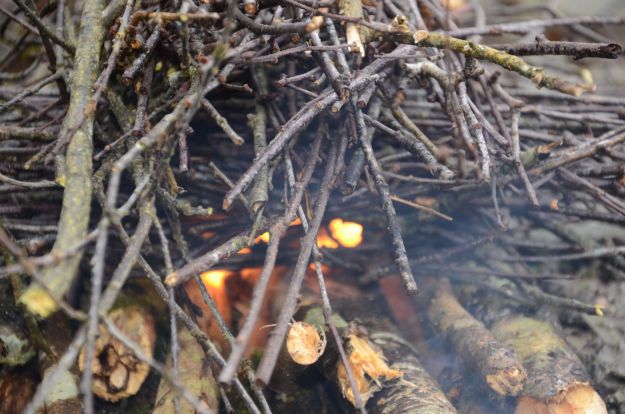 We hired a canoe (well in fact we exchanged canoe hire for some knowledge and experience!) and we set off up a creek… I’m not telling you which one… it was against the tide and seriously hard work! There is a lot of mud in Cornwall along the river banks and therefore not that many places to moor up. We’re talking 4 foot deep river mud in places and it’s dangerous to get stuck in it. So, in the end we found a little stream trickling down to the creek from the woods, disembarked and carried the canoe up the hard stream bed, sliding it along the soft mud where we could.

On reaching the bank we found a nice hard spot, off loaded the kit and set about collecting fire wood and tinder. Now the theory for collecting firewood in very damp conditions is to collect dead standing wood. That is bits of trees which have died a while ago but are still attached to the tree or have got caught and therefore not fallen on the ground. This wood may be damp on the outside if it’s been raining (apparently sometimes it doesn’t rain!) but inside it should be dry and seasoned ready for burning. You can chop it up to get kindling from the dry inside and it’s meant to be a reliable way of getting a fire going in wet UK conditions.

Amazingly (for this part of Cornwall) we also stumbled across a mature silver birch tree… the treasure chest of fire lighting materials. Silver birch drop lots of matchstick thin, dark brown twigs all over the floor beneath them and collecting them is easy and satisfying. These twigs contain lots of the fabulous fire starting oils that make the silver birch the firelighter’s best friend and in theory will catch light easily even when wet.

So, as you can imagine, we were feeling pretty darn confident when it came to actually lighting the fire… less than twenty minutes of preparation had given us plenty of kindling of various sizes and a nice stack of firewood which had never touched the damp ground. Rob had got a snazzy little tinder box for his birthday that morning so he wanted to use that with a fire flash to light the fire… given that we frequently use much more challenging methods, such as a flint and steel, just to light the fire in the sitting room of an evening it didn’t even occur to us that this would prove to be a challenge!

And boy was it a challenge! The tinder went up fine… but the birch twigs, kindling and all the wood we had collected was so sodden all the way through that it simply steamed until the pathetic embers snuffed out.

A bit of preparation usually pays off

Plenty of excellent kindling, or so we thought

Getting a flame is the easy part!

We got there in the end, hand picking the driest finest twigs, removing out bark from wet twigs to expose the dry slivers of inner heart. Rob hiked up the hill to find standing dead wood from higher and therefore dryer ground and from the edge of the wood where the wind will have dried it out better. We split this down and meticulously carved off damp bark and outer layers. Everything was just so WET!

Finally we had a fire and eventually it produced some heat. We cooked lunch, had a cup of tea and discussed the challenges and alternative solutions. We reflected on how helpful a folding bow saw would have been (and have since purchased one!). We watched the tide reach its lowest point and start to return. Eventually we packed up, hauled the canoe back down to the water’s edge and put very little effort into drifting on the tide home.