Now this log cabin is on a whole new scale. Sure we enjoyed the rustic charm of the cabin in the woods but lets be honest, a hot tub, roaring fire and clean, well stocked cabin is far preferable, even for the Deans!

We’re at Harman’s Luxury Log Cabins in the Monongahela National Forest and it is stunning here. Rugged rocks and vertical forests tower over the Potomac River, which runs right outside our cabin. We were heading for Shenandoah National Park but found this place and decided to stay put. 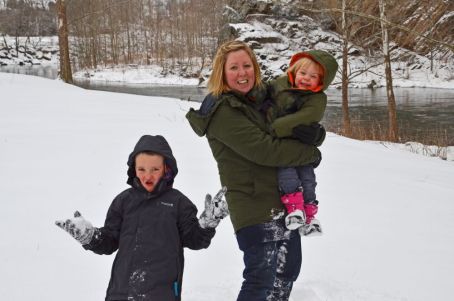 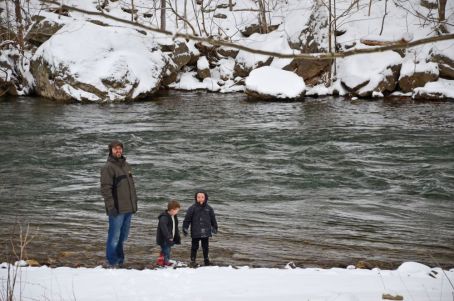 Boys by the river. Patrick, of course, got his trousers wet in the water and by the time we went back in the bottom of his jeans had frozen solid!

It snowed heavily yesterday and we spent most of the day snuggled up around the fire inside the cabin and hoping in and out of the steamy hot tub on the porch. We did of course get outside for a snowball fight and to build a snow man but little kids chill quick. Plans are afoot for creamy chicken on the campfire today and possibly a visit to local caves.

Enroute here we also stopped at the Beverly Heritage Center which teaches about the Civil War and history of the region. One piece of information really stuck out to Alfie and I and captured our attention. The Native Americans who lived here for 12,000 years before Europeans (ehhm) “arrived”, used to follow animal tracks in order to find the best and easiest routes around the terrain, through the woods, across rivers and so on. Over millennia these tracks were worn and became, relatively, permanent paths so that when the Europeans arrived they used the same tracks but now with horses therefore making the paths even more distinct and permanent… they then became the tarmacked mountain roads we are using today in our cars. So the roads we are driving on here were once, no that long ago, animal tracks… how cool is that! The same can’t really be said in the UK because there were so many stages between hunter-gatherers, following animal tracks, and roads. Farming settlements presumably shaped the networks across Britain and of course the Roman roads.

The Hertiage Centre is in the regions old Court Rooms and here is Patrick being the judge, probably sentencing someone to death or something. 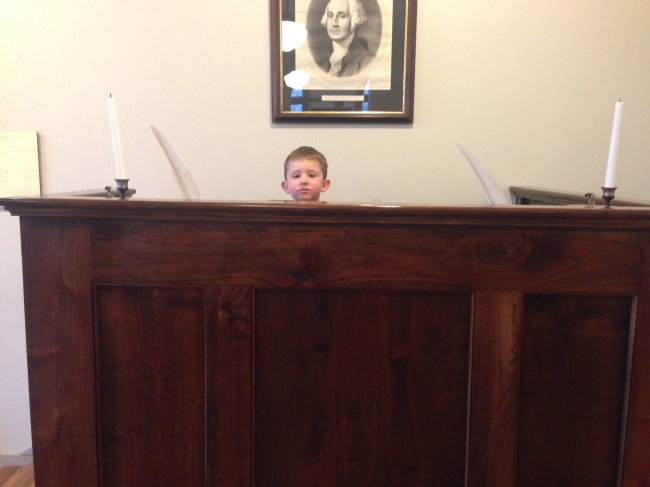 The USA is vast. Just getting across it will take so much of our time. We only get 3 months on a standard visa.

I’ve been listening to an audio book by Bill Bryson in which he describes the Appalachian Mountain range and an email this morning from a fellow blogger who lives in those parts has left me thinking perhaps we should cut out the south and explore the central mountain region between Virginia and Kentucky more. The history of the region is fascinating, shrouded in mystery and intrigue and has played a key role in American history as a barrier to East to West travel. In 1999 a BBC correspondent Richard Lister talks about his journey to Sneedsville and the history of the Melungeon people of the region… I wonder if much has changed in the last 14 years – if the town is any easier to reach and if the knowledge of the first settlers to America is any further forward, perhaps having empowered the people as he suggests? I’m intrigued! The idea of such independent people living self sufficiently in the mountains commands huge respect. Yet their reasons for developing such self reliance is down to persecution and prejudice.

During our journey I am hoping to learn far more about the history of racial clashes from both long ago to present day and it’s something we hope to teach our children about. Knowledge and understanding of conflict from both sides are the tools we need to arm our children with so as to prevent perpetuating the ignorance which is the ultimate cause of most prejudice. But this can’t be done through education alone… diversity must be experienced.

Living in ethnically diverse England, albeit in one of the least ethnically diverse and more racially prejudice regions (possibly the only thing I don’t like about Cornwall), I am somewhat sheltered from the racism in the rest of the world and our children are thoroughly under exposed to alternative live styles and cultures (except perhaps of the hippy variety). Yet to move forward as a united race of people we must teach our children to respect and indeed welcome diversity and allow them to experience as many races and cultures as possible in a positive and enjoyable way.

The geology of the mountain range is fascinating too, having been born 480 million years ago, they were then almost entirely eroded to flat plains before being up lifted again. The second uplift rejuvenated the springs which had caused the erosion and are now, again, following ancient folds and faults or carving out new canyons through layers of hard ancient rock, exposing the layers and features.

In addition to a rich human history and stunning geological features it is also an area rich in diverse wildlife. The southern stretch of the Appalachian Mountains was never touched by glaciers and therefore is home to a range of “slow growing” species such as salamanders and interesting snails. The Ice Age induced extinctions in the north of the mountain range didn’t occur in the south and therefore the rivers in the region are rich with crayfish and mussels. There is also incredible bird life there from bald eagles to the scarlet tanager. And as for mammals… well, as the boys keep reminding me… “mummy, you’re scared of bears!”

So the question is… do we cut out Memphis and the Mississippi in lieu of the mountain trails, wildlife and people of the Appalachian Mountains – Or do we wizz through them to reach to south, to the culture, music and cuisine, to join poor boys and pilgrims with families, down the highway, through the cradle of the civil war, to bounce on in to Graceland?