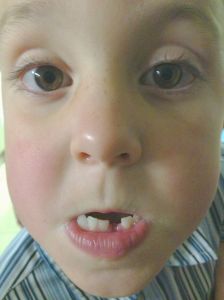 It seems like yesterday when Alfie got his first tooth. He was quite young at about 17 weeks old and he bit my nipple, ouch! On Saturday that first tooth fell out!

Skip back about 27 years and my sister and I were loosing our teeth at a time when my father used to travel the world a lot for business. He was (and in fact still is) a frequent flyer to exciting locations such as America, Hong Kong and Japan. After the tooth had been “bought” by the tooth fairy unbeknownst to us my father would buy it back from her and take it on a business trip where he would then dispose of the tooth in an interesting location. Our teeth have been thrown off the Golden Gate bridge, buried in a flower pot in the Empire State building, deposited in the Imperial Palace in Tokyo and left in the Jardin des Tuilieres in Paris … how cool is that!

So having made my own deal with the tooth fairy I’m now considering how to dispose of them. With our travel plans afoot it will be fairly easy to follow my father’s theme for Alfie’s teeth and I suspect the first will reside in New York, perhaps in Central Park. But what if you don’t have such an opportunity… what other ideas are out there for dealing with the teeth which to many parents can mean so much?

The bin is obviously one option and fair dos if that’s the route you go – they are just teeth and to be honest are a little gross really! But many of us just can’t bring ourselves to bin these little bits of our babies – they’re not like toe nails that keep on growing.

You could bury them in your own garden, perhaps by a specific tree or plant. If you were hippy enough to have buried your placenta then this is likely to be an appealing option. If you don’t have a garden then a local park, woodland or river could be an option?

You could simply store them in a jar and present them to the child in adulthood to do what they want with. If that appeals to you and you want to keep them nice then here is a link on how to “preserve them”. If your of the very organised variety of parent then you can even get these these little trinket boxes for keeping them in: Juliana Silver Plated Tooth and Curl Box

. Not my cup of tea but each to their own!

Or what about making some tooth jewellery? Sounds kinda grim but actually when polished up they are meant to look quite pearl like and it’s not that long ago that people made broaches and the like from the hair of dead loved ones! Here is a link to making jewellery from your child’s milk teeth.

But if you’re of a more practical nature, how about sending them off to have your child’s stem cells harvested? It turns out the cells in the pulp that comes out with milk teeth, if preserved rapidly and collected by courier can be grown and multiplied before being frozen and stored in case your child needs them for medical treatment in the future. It sounds like an appealing option but bare in mind it’s expensive (£995 plus £95 per year for storage from BioEden) and the treatments which they hope to develop using stem cells have yet to actually be developed so it’s far from a complete insurance but well worth considering if you’ve got plenty of money or you’re particularly paranoid.

Having written the above I’m thoroughly relieved that we are off round the world and my dad has given us the inspiration for our disposal route. They’ll be no jewellery or anxiously awaiting couriers in this household. There is a tiny little pot that will make it into our bag to head off round the world so a little bit of Alfie can remain in all the interesting places we will visit. If I’m organised enough I’ll try to document the locations for him.