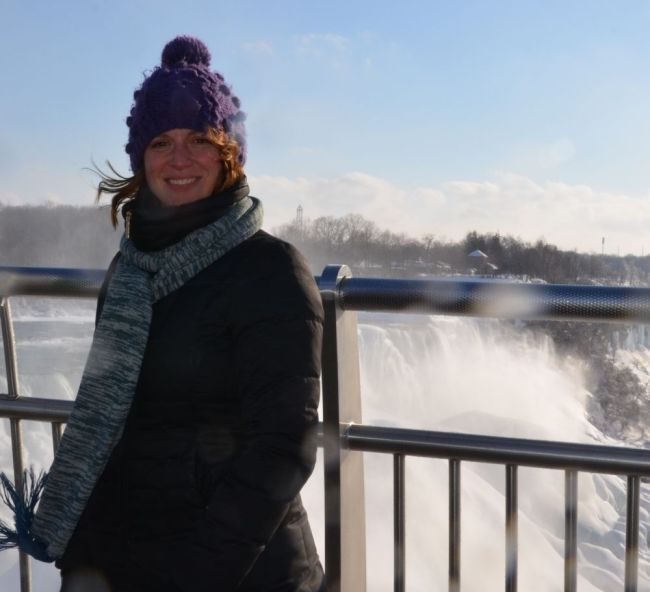 Our adventures aren’t just about the places we go and the things we see. They are also about the people we meet, the stories they tell and the songs they sing. Posts about people can take a little longer to get ready and up though as they can take research and checking. We stayed with Lucy two weeks ago in Buffalo and now it is time I tell you the tale.

I’ve known Lucy all my life. Our mothers trained as nurses together and Lucy’s mother is my godmother. We grew up playing together at barbecues and gatherings and when I was 13 Lucy dyed my hair for the first time.

We grew up, Lucy trained as an Archaeologist and I as a nurse, like both of our mothers. We’ve seen little of each other in adulthood due to distance and general life, although thanks to the wonders of Facebook we know a lot about each others lives, work and loves.

Now Lucy is an art conservator specialising in the preservation of historic materials. You may not have a clue what that means but please, read on…

Having travelled adventurously around so much of the world, in particular, Egypt, Sudan, Turkey and Norway, she now resides in Buffalo where she teaches at the University, which is how we came about rocking up on the doorway of her lovely apartment in a unique Victorian house on one of many Avenues in this pretty American City.

And when we arrived, once the whirlwind of children had settled for the night and the wine was cracked open, the stories began… Oh the stories… Who knew Archaeology was such a hard core career???

The story I want to tell you about is a cold story, of dead dogs and rancid tins and frozen urine… but it’s a great story. A story of Antarctic adventure and history and the amazing efforts we go to in order to preserve the important stuff that represents so much. But the picture Lucy paints isn’t all bad.

“The best thing about Antarctica was the landscape, totally untouched by humans. It was complete isolation and silence apart from the sound of the wind and in the summer, birds. Up on the cliff top overlooking the edge of the sea ice, I would sit for hours in the evenings, under the sun staring through my binoculars, looking down on Emperor penguins marching and waddling across the ice; later in the summer the ice had drifted away leaving open sea and I’d see killer whales surfacing just off shore.” 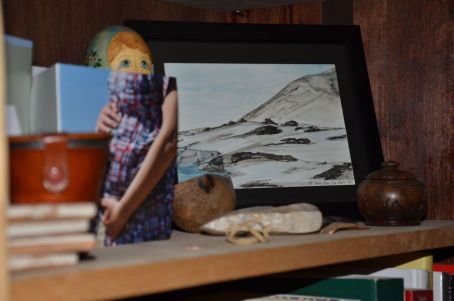 Lucy’s beautiful Buffalo apartment is just what you would expect from such a well travelled adventurer – Pictures from the Antarctic decorate the shelves and wine is served in Egyption chalices. The whole place feels worldly and experienced.

In 2010 Lucy travelled to the Antarctic for a 6 month expedition. The aim: to conserve the historic huts (and their contents) from the Heroic era of polar exploration. Huh? What’s that I hear you ask… Okay so you remember Scott right? And Shackleton, polar explorer who went on to attempt to cross the continent of Antarctica, amongst other expeditions. And we all know how hard core these guys were with their basic equipment and depressing lack of knowledge about frozen landscape survival skills. They took ponies for goodness sake! The successful South Pole winners from Norway took dogs… enough dogs to feed dogs to dogs on the return journey, which is how they did it – Horses eat hay and there isn’t a lot of that at the south pole! Well all these explorers had huts and took rations and thanks to a lack of humans and extreme frozen temperatures they have been preserved very well for a hundred or so years. But to keep them longer they need a little extra care.

So what are the contents in the huts for conserving? Things like the semi decomposed remains of penguins they had killed to eat for survival. Clothing, tinned food, and 100 year old coco powder that still smells perfect… Imagine that! As she would dig to expose the remains of the ponies they had taken smells which had been trapped there were released… the smell of the horse urine from an animal that died 100 years ago rising up through the air as if if were doing it now. Dog remains are persevered too, those not eaten by their keepers before starvation.

Interestingly it’s not the work and conditions that really challenge life in the Antarctic. Lucy tells me about the aspects that were most challenging for her and I wonder if it was similar for the early explorers, that yes conditions were hard, fatally so sometimes, but it’s the interpersonal stuff that makes survival in such isolating conditions even harder “The toughest elements of being there were I guess the group dynamics. Sometimes and with some people it was easy and fun. Other relationships could be difficult on occasion and when you are stuck with these same people for many months small problems get blown up inside your head into huge issues.”

Now I’m not normally someone who takes the slightest interest in celebrities and fame but there are a couple of guys out there who really get me excited. You all know I’m a big Ray Mears fan but my other top outdoor handsome hero has got to be Sir David Attenborough. Lucy met him… he ate her Antarctic home baked cookies… How majorly cool is that? “Meeting David Attenborough at Cape Evans: Well it was a dream. He is certainly older than you imagine. He had an assistant who followed him around with a fold up chair so that he could rest after he’d walked about for anything longer than a few minutes. He was extremely lovely and interested in us and the work we were doing there. He held me in a firm shoulder hug while we had our photos taken. I was prepared for Sir David’s visit with my homemade Peanut blossom kiss cookies – of which he ate two and took one with him for the helicopter ride home.”

Lucy Skinner you are such a dude for having such a cool career. I know it doesn’t come without sacrifices and hard work but WOW… what an inspiration to our youth and what an amazing adventure you have had! 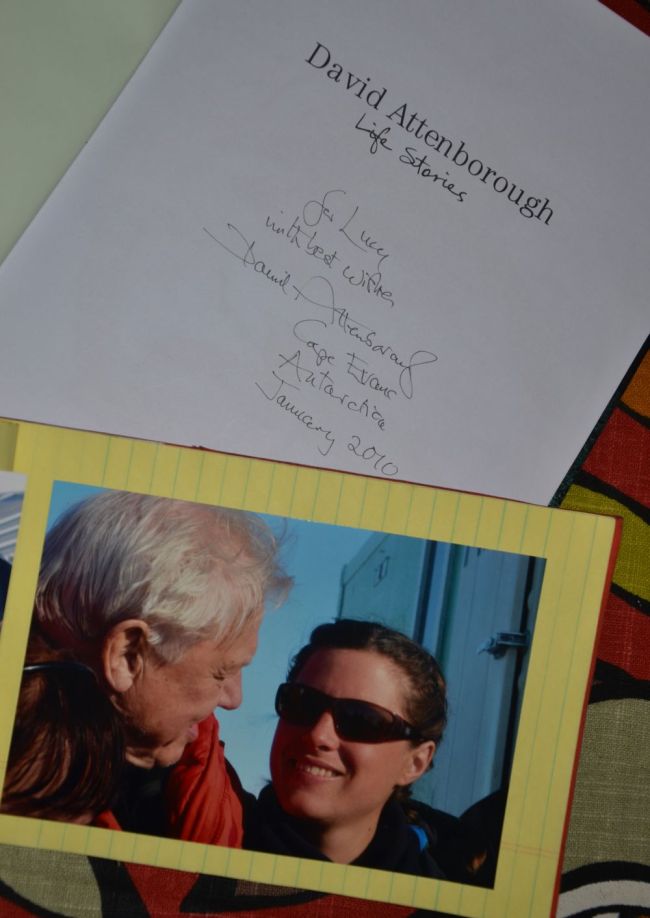