The Deans have landed… On their feet! A great nights sleep (albeit with a shockingly early start at 05.30am again) followed by a true American breakfast, cooked up expertly by our host at Lazy Pond B&B, Matt. Pancakes, bacon, maple syrup, sausages, French toast, potato hash, coffee… You name it, we had it!

Breakfast was followed swiftly by playtime in the snow… 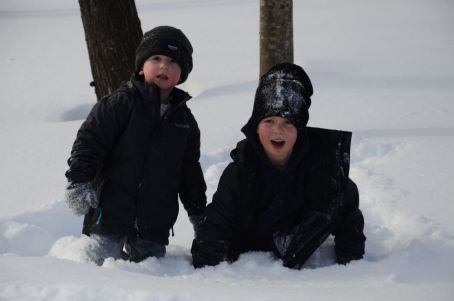 Alfie and Patrick in the snow at Lazy Pond B&B

She looks so sweet here but was literally SCREAMING “Cheese” at me whenever I pointed the camera away from her!

Snow play was followed by a trip to The Dancing Cat Saloon for yet more food, some jazz and some whiskey. If you visit Sullivan County in the Catskills you absolutely must visit this saloon. The mouthwatering menu lived up to its description and more… Fresh home made raspberry jam like I’ve never known and zabaglione, which is like a sort of cross between clotted cream and custard, amazing! They also have a distillery on site and we got a personal tour by the distiller himself, Monte. The kit looks like something out of Willy Wonka’s Chocolate Factory and is used to make a host of interesting whiskeys, vodkas and gins of all sort of amazing ingredients from local farms.

Obviously we couldn’t leave without a bottle for the road.

Most Righteous Bourbon by the Catskill Distilling Company

It just so happened that the co-owner of the saloon, Stacey, happens to be an avid eagle watcher and pointed us in the direction of the best eagle viewing area in the county… Which I’m sorry but I’m not posting publicly online… You’ll have to visit Dancing Cats and ask Stacey for yourself. If you’re not into Eagles then visit them for the music, food and the mermaid on the piano.

The mermaid on the piano at the Dancing Cat Saloon

So it turns out our experiences of less friendly people in the city were very much limited to there. People out here in the Catskills could not be more friendly, more welcoming or helpful. We mentioned our slight nervousness at the snowy roads that we are not use to and were instantly provided with Monte’s mobile phone number in case we should run into trouble.

On leaving the Saloon we headed off to spot us some eagles. But not before stopping to check out the monument making the regions most famous event… Woodstock. It was kind of snowy so we couldn’t really see much but, dear readers, if you could have seen me wading through the snow that came right up to my bum just so I could get this picture to share with you… Well you would have been proud of me! 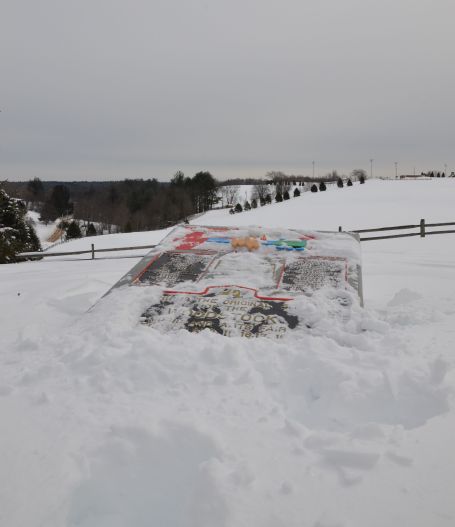 And so to the eagles. I’m a little embarrassed to admit that, despite my navigating prowess, we have taken quite a number of wrong turns between New York City and here and we have turned around more times then I care to remember (or confess). We keep reassuring ourselves that we’ll get used to the signs and junctions but honestly, they come out of nowhere and every road has about 4 different numbers and names! Okay, maybe that’s a bit of an exaggeration but I’ve successfully navigated in many a European country without issue or error and yet am utterly flummoxed right now. However, I have absolutely no intention of getting a Sat Nav so I’m sure I’ll get used to it soon (or end up in Peru?).

Eventually we found the place and Orla woke up right on que. The snow was starting again and we really don’t want to get stuck so we didn’t spend long… but… We saw a Bald Eagle. And it was magnificent. It was also brief so I don’t have a photo to share with you. But I will, I am sure, over the next few weeks and months.

Eagles weren’t the only wildlife we saw. I spotted a couple of deer and we saw a Blue Jay and a Common Merganser (google it if you’re interested).

To be fair to kids (and Rob and I need reminding “to be fair” as we moan between ourselves quite a lot about them) we were pretty impressed by how long they were in the car and the boys really got into the bird watching. They are getting pretty good with the binoculars now too.

Back to beautiful cosy and warm Lazy Pond we headed. Warm was what was needed, boy is it cold out. We have spent the evening watching Home Alone with the kids, snuggled up on the sofa.

I’m a little worried that we have been so spoiled at Lazy Pond that no where else will live up to it. But more about that tomorrow and until then, stay warm.