Tell people from the UK that you’re driving across America and you’ll hear lots of accepted facts about how the roads are so big and wide, the speed limits are ridiculously slow and there are coppers on ever corner ready to ticket your speed.

That’s certainly what we thought before we got here. But now, having travelled over 15,000 miles from New York to California, back to Washington DC and now enroute to Montana I though it was time to share our view of America’s roads.

First of all, it’s not true that the roads are all huge and wide. Around the cities there are places that the interstates (equivalent to our motorways) get up to four, five or even six lanes, briefly to manage the extra traffic. This happens in England too, although rarely above five lanes. The vast majority of the interstates we have travelled have been a mere two lanes with occasional stretches of three. The lanes are no wider than ours either. Although many roads are wonderfully straight allowing vast views and enticing mirages.

Luckily it’s also not true that the speed limits are super slow, topping 55mph max… In some states there are silly restrictions on double lane roads limiting to 55 or 60mph but most states allow 65, 70, 75 and even 80mph! Many single lane roads are 65 which is above our UK equivalent. They use speed limits to manage traffic around junctions which works very effectively and we’ve rarely been caught in bottle necks and back ups around the slip roads.

In fact, the lack of traffic on the roads has to be the best thing about traversing this huge continent by road. Set the cruise control and enjoy the ride, it’s rare you need to break unless you’re coming off for a loo break! And speaking of loo breaks, the rest stops, although few and far between are ideal for quick stops and picnic lunches to keep costs down. Literally like extended lay-bys they have toilets, vending machines and shady picnic tables. Occasionally they even have play areas. Unlike our vast and complicated service stations which seem to suck the money from your wallet as you enter the slip road to it and take forever to get back on the road from, these simple rest stops are genuinely convenient. It’s just a shame there aren’t more of them!

A belief about America that is semi-true is that they don’t really have roundabouts. But they do have a few, often at the entrance to a small town. And because there are so few of them the Americans don’t know how to use them, which can be amusing to witness… Yesterday we were thanked for not pulling out on someone’s right of way. Conversely though, we still, after four months of driving, seriously struggle with the archaic and bizarre stop signs, particularly on cross roads where all four directions stop and to know whose right of way it is you needed to mentally note the order that everyone arrived at the junction. If you both, three or even all four arrive at the same time then there is a convoluted and frankly dangerous hand signalling conversation while you all try to give each other right of way and then all go at once. To confuse matters more there are rarely lines marking the place to stop or indicating rights of way and so on… If your view of the stop sign is obscured or missed for any reason then you just have to hope no one else arrived at the junction a split second before you did!

On the other hand, a truly great feature is the ability to turn right on a red light as long as it’s clear, with the incredible number of traffic lights in use this is a handy way to keep the flow going.

The downside to the higher speed limits is that even the massive trucks and people pulling lorry sized trailers also travel at high speed, and very close behind you which can be unnerving to say the least. The roads are also full of blown out tires which you need to swerve around on a regular basis. We’re not sure why this is but we think because they can use their tires until they’re totally bald, combined with the high truck speeds and in some states, particularly New York and Pennsylvania, almighty pot holes everywhere. The hard shoulders are littered almost continuously with the strips of rubber which no one seems to collect or move, even from the middle of the carriage ways.

Lanes aren’t used as they are in the UK and undertaking is totally acceptable and standard (although I doubt it’s legal). Rob and I are debating if this is good or bad… I think it’s bad as it’s dangerous but Rob likes that he can undertake people who sit in outside lanes. People tend not to flash to give way or let you know you can pull out so when we do from sheer habit people seem either very grateful or utterly confused.

Speaking of what’s legal, in many states you have to wear a seatbelt in the car yet you don’t have to wear a helmet on a motorbike… Seeing people on bikes without helmets and with handguns on their hips is somewhat unnerving to us Brits!

Despite the hazards and strange stop signs, for the most part driving in America is pretty pleasant. We’ve seen plenty of state police pulling people over but as long as you don’t go crazy on the speed you’ll be okay. The signage takes a bit of getting use to and we still struggle a bit, particularly where the same stretch of road has loads of different numbers and even names.

The views are the best bit, and coming off the interstate doesn’t always add a whole lot of time so can be well worth it for getting to see birds and mammals, impressive landscapes and massive skies. To us, even the regular whiffs of road killed skunks is kind of fun. 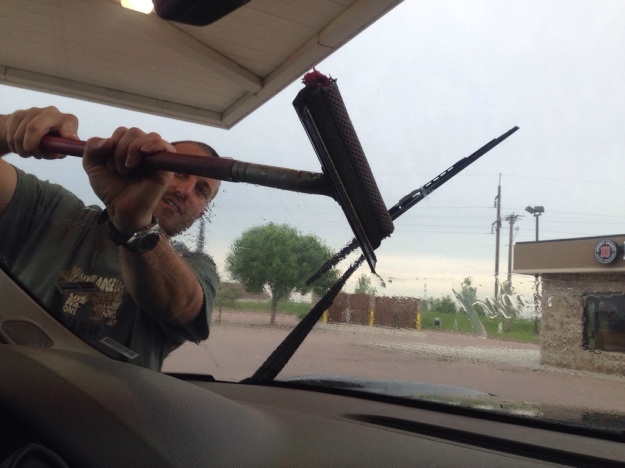