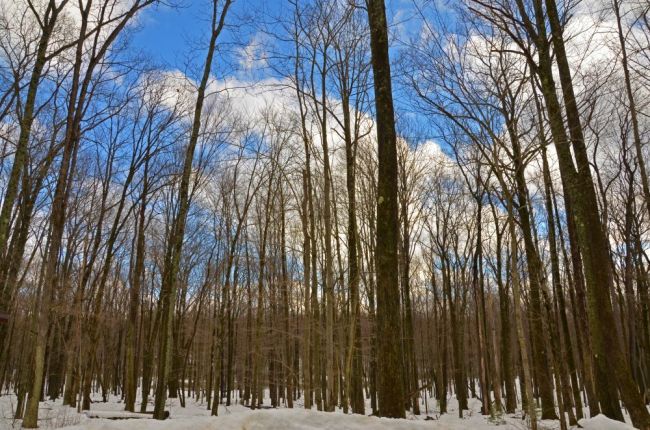 Wow, time for an update! We moved on from Buffalo on Thursday morning and managed to obtain a cabin at Deep Wood on the edge of the Allegheny National Forest.

It was right up our street… rustic and basic. Think wood walls, a slightly musty smell (okay that’s a lie… it was a strong musty smell), mouse droppings in the draws and a general air of nothing having been altered since 1965. We LOVED it! The beds were comfy and we were separate from the kids, it was warm and cosy and absolutely silent at night. We drank tea and did jigsaws with the kids. Honestly, I could live in a cabin in the woods quite happily for years… maybe one day I will…

Sadly it rained rather a lot and the snow had turned to ice on the paths so walking out was tricky. It just so happens that much like the drive through pharmacies and drive through ATM’s in America you can also do some great drive through wildlife and bird watching! Obviously you’ll see more off the beaten track in the back country. But to get things going and for the boys to start using their binoculars and identifying birds and animals we headed off in the car and found numerous pull over areas designated for wildlife observation throughout the main road through the forest. 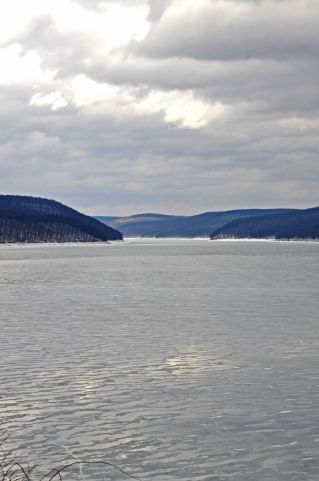 The Allegheny Reservoir, with snowy banks and slushy, icy water.

We saw Black headed Chickadees, Woodpeckers (not sure which type unfortunately), American Robin and the lovely Blue Jay. We also saw impressive Black Vultures, plenty of white tailed deer, red squirrels and spotted a raccoon crossing the road. To locals round here this probably doesn’t sound like an impressive haul but when you come from a country which has none of the above and you have three very small children in tow… believe me… it’s a good haul for now!

While we were settled in our cabin we took the opportunity to rearrange our luggage into an efficient system. We now have two tubs, one with kitchen/cooking kit in and one with food staples such as oil, seasoning, flour, stock cubes and so on. A third small tub has our bushcraft kit and our clothes system continues with each of our stuff sacks within one main bag and a laundry bag for dirty clothes. That’s now in a soft bag easy for taking in and out of our accommodation as we move, and also has our wash bag, Orla’s nappies, night-lights and chargers in. Another small bag in easy reach in the car has our binoculars and laptops. The suitcases are now largely unpacked but just have lots of the kids workbooks and spare stuff in that we use less frequently and are tucked away in the roof box we acquired at a far cheaper price than upgrading the car size! Maybe one day I’ll organise myself to make a video blog of our efficient system – once I know for sure it’s actually an efficient system!

We also invested in a cool box which fits behind the driver seat and plugs into the car and a camping stove. This means that A) we are (hopefully) not going to become morbidly obese within 5 weeks from living on gigantic pizzas and sauce swamped McDonalds and B) we (hopefully) won’t be coming home broke within 5 weeks from eating at places that actually serve real food. Since moving on to Buffalo we have basically reclaimed our normal, balanced diet from home and are enjoying cooking on the road. Our system allows for cereal and fruit for breakfast, sandwiches or salads for lunch and a normal meal for tea. There will still be times we’ll eat out and no doubt sample some more of the fast food establishments when needs must, but for now it’s nice to be sticking to budget and not feeling like our arses are growing an inch a day!