We reached our limit camping in the Rocky Mountains… The snow was too much. Day time temperatures of 4 degrees Celsius and night time temperatures dropping to -6 was a little too low for the Dean kids and the bad mood of the youngest who is unfortunately cutting her last teeth was taking us to the edge of reason and sanity. So despite loving where we were and gaining so much from the fantastic knowledge and experience of our host, Robin, we took the decision to move on to warmer climates for camping. We are heading back to the Appalachian Mountain range.

Camping in the snow with a toddler is a step too far for even for us.

We had a brilliant time at Earth Knack and achieved lots despite the weather and toddler tantrums. We dug flowerbeds, build bridges, Rob did some tree work and the kids always love watching him working with a chainsaw. We potted up seedlings, prepared communal meals and emptied the compost toilets. We also made great new friends with Gray and Suzannah, the interns there now.

The bridge Rob built with Suzannah and Gray

We were a bit sad packing up but as the two younger kids decided to really step up the bad behaviour we knew the decision was the right one and we cracked on. But we decided to head to some hot springs to get clean and have some fun. It worked and we emerged clean and refreshed, ready to hit the road. 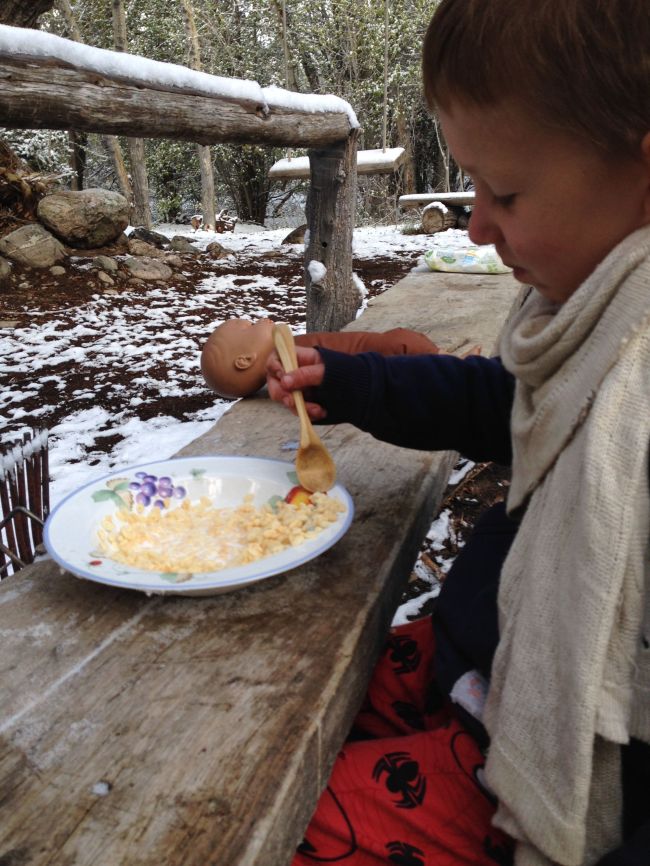 Breakfast in the snow!

It’s funny how things turn out though because at this point things improved… Not only did we find the most delicious Chinese food in America a little cafe we happened to stop at but we then spotted a Golden Eagle feasting on it’s freshly caught prey in a field. We were able to stop right by the edge of the field and get an incredible view of it tearing the dead creature to pieces. It’s the first time I’ve seen a Golden Eagle and it was spectacular, breath taking and skin tingling.

Driving late into last night we drove along snowy mountain passes as the temperature dropped around us. But snugly in the car we knew a warm motel bed and indoor toilet awaited us instead of a freezing tent.

This morning, refreshed we headed to the Rocky Mountain National Park. The vast majority of it was shut due to the heavy snow but we went ten miles into the park in the hope of finally seeing a bear. Sadly the bears still elude us but we did spot moose, pelicans on a lake and some yellow bellied marmots which more than made up for the closed road and lack of bears.

Heading East again now past Denver we’ll be driving through Kansas tomorrow and on to Tennessee, the Appalachians and warmer weather. We might make it right over to the east coast for a beach day… We haven’t seen the sea for months which is a strange feeling when you’re used to seeing it from the kitchen window at breakfast, lunch and dinner.